Serial flasher Paris Hilton loves flashing the flesh, and we can’t get enough of it, it seems. Some days she looks pretty hot, other days she looks like a fucking hobo, but every day you know you’d still fuck her 😀

Here’s a collection of pics ranging from cleavage (now there’s another thing – whats with the some days she has titties, and others not? Are they blow-up jobs?) to ‘accidentally’ having her swimsuit slip down, ‘unluckily’ in font of hundreds of people, plus the ever-present paparazzi. 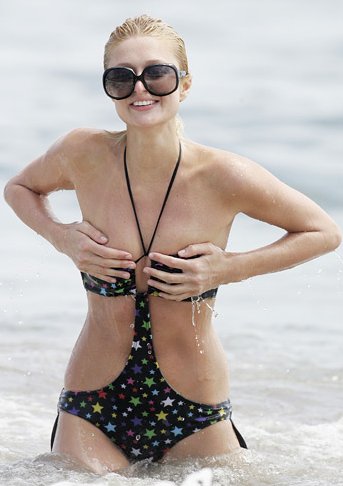 You know for sure she’s acting the innocent here, when what she is probably doing, instead of covering her tits up, is most likely pulling her top down knowing full well the paparazzi were on hand to take the following pics. Gotta be some kind of rush for Paris when her pics are in all the papers and on the internet for thousands of guys to look at her dong another Paris Nipple Slip. Hell, I gotta confess, if I were a chick it’d get me going as well 😉 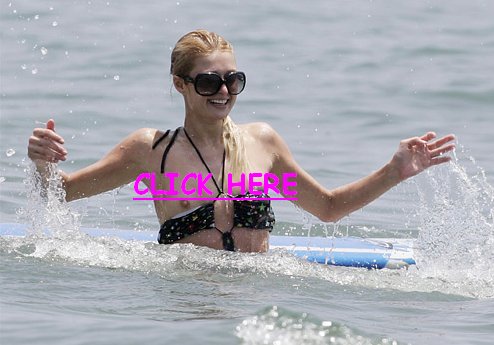 Exhibitionist extraordinaire Paris Hilton yet again gets her tits out in public, this time her preferred method being to wear a skimpy costume as she went surfing, presumably after having tested the outfit at home to make sure there was every chance it would lose position and show off her perky tits and stiff nipples

The queen of public nipple slips is still on fine form with her ongoing quest to expose herself to as many millions of people as possible. There are actually a couple of Paris Hilton Nipple Slips, from a recent day surfing with a bunch of guys she decided to flash, as well as the watching photographers, whom Paris didn’t mind showing some nipple to in the slightest: