A bit of a sneaky one this, as Janet Jackson gets caught nude sunbathing by a telescopic video camera in what appears to be a private yard of some sort.

Not the greatest set of tits in the world, but still a nice body and her ass is in pretty good shape, as you can tell on the video. And yes, we do get to see her pussy! There’s also a bonus clip of ‘that’ incident where Justin Trousersnake rips her top to reveal her right tit to a stadium of football fans, not to mention millions watching on live TV. Classy.

Still, we all have our sexual quirks, and if showing your tits to a bunch of strangers in real time across the world is your thing, then who are we to judge. Don’t kink shame, and all that. Plus Janet is pretty smokin’, and you can never see enough different sets of tits. Go Janet! A far cry from her past appearances on US tv show ‘Fame’, Janet did what all celebrities eventually do.. utilise their sexuality for the betterment of mankind. Or something like that.

Here she is at the ripe old age of 40 plus, displaying a pretty toned figure, and great tits as well as she poses topless with a pair of braces only just covering her nipples: 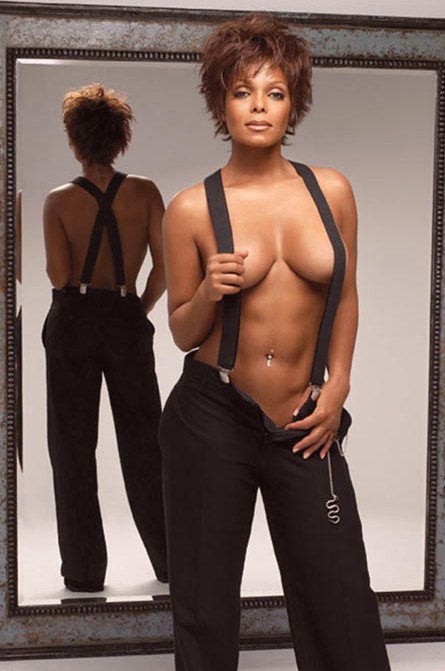 Now, I don’t know about you, but that’s a pair of boobs I’d like to get my mouth around 😋